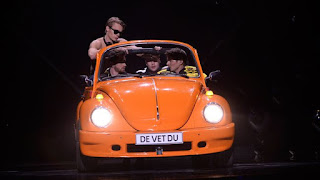 We've seen the performances now, and whatever you think of the actual song, this has got to be one of the most incredible bits of live television editing I've ever seen! Jeepers there was a lot going on there!

The first cheeky suggestions of the songs from this Saturday's debut MF semi are in, and while not giving us too much to get excited over, still offer up some amusement. We've got lovely Boris and gnarly Ace living up to the rule of the diminishing return, Adrijana, Dinah and Nano sounding a bit like already popular songs from the pop charts, and Dame Charlotte having a grumble about her hip (we think).

So thank heavens for De Vet Tu. These roustabout young 'uns are clearly following in the now-strongly-defined wacky outsiders slot so strongly forged by Samir & Viktor and the lad Banan, but there's still a lot of singalong fun to be had, going by the meagre first minute we've been allowed to hear.

And of course, the show will be lively and silly and instantly hated by those folks who much prefer serious (dull) music, but it'll doubtless be a small oasis of fun in an increasingly formulaic format.