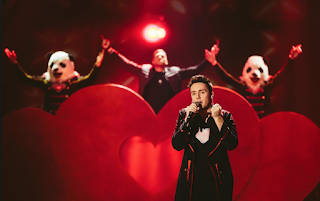 (Click here for the most literal stage act of the weekend...)

United Pandaz seem to have removed all evidence of this event from the internets, the grumpy ursines. We'll let you know if it pops up again, meanwhile, try the link above now and again, just in case!


When we saw the act were going to be called United Pandaz, we never begun to imagine that there would be actual pandas on view. Well, they weren't ACTUAL pandas, but they were pretty decent representations, stood there all cool in their pop star military garb, waving tiny flags and having it large behind the decks.

And it was a bit of luck there was something to distract us from the tune, because it was even more similar to Swedish House Mafia's Don't You Worry Child than that Cascada somg from a couple of years back. But luckily for their lawyers they just about ducked out of every seventh note, therefore causing themselves any further worry.

Well, that and the fact that so few people liked it that it couldn't drag its bones to its own national final. I think it's probably for the best...
Posted by Roy D Hacksaw at 14:36