OK, OK, so there's a lot for the more ardent Eurovision observer to pick holes in here. Yes, it was released into the public sphere a good three-and-a-half months before the legal due date of 1 September. But the girls here were clearly distraught about our Eurovision performance that weekend, and up to the point that I watched it, it had only gained 135 views, so that's hardly an advantage-making spot of previousness.

And yes, it does verge on the illegally political with all its talk of leaving the EU. But hey, 1944 and all that! Hang about? Rewind a little. They're apologising for leaving the EU on 18 May when it was at least another month and a bit before we actually left? These girls have got foresight. Heck, maybe we should give them a go, as they seem to be able to look into the future and pick out a result. We hope they had some money on it!

But while you can't fault the speed at which they hammered out this pretty well-put-together little tune (and heck, there's some better rhymes in there than at least 78% of the last five year's entries have managed), it is perhaps a little pleady. You know, the kind of thing that used to litter the first fortnight of the Swiss open process and has now begun to creep in over here. And nobody likes a pleader.

However, despite the fact that it was disqualified the second they pressed post, that the songs panders to a lot of the usual "no one likes us" nonsense that anyone with an abacus will tell you isn't actually true, and is just a little bit political, we'll give it an Apocalypse chance. Well, it's been an unusually slow September after all, and we've needed something else to cheer us up aside from that curious Alex Angel chap from Ukraine. Has Bognibov declared yet?
Posted by Roy D Hacksaw at 09:27 No comments:

I think we've found ourselves a new hero. Not only is young Alex here the lead singer of noted Ukrainian metallists Black Angels, he's also got form on a whole load of casting shows, and is currently in dispute with his home nation's version of X Factor regarding a spot of alleged corruption and contract irregularity.

And what's more, he appears to be entering his entire repertoire into Eurovision this year!

After yesterday's spot of cod metal, we've just uncovered this actually-almost-decent tune that's reminiscent of some of Sparks's more less heard rocky output in the eighties, and some of that dirty London sleaze rock of the nineties.

One assumes that the poor lad is going nowhere near his national final. But that's a shame, because he's weaving pure Apocalypse gold with each new tune! Just don't watch his videos when you're Nan's in the room or you're at work, OK!
Posted by Roy D Hacksaw at 04:05 5 comments: 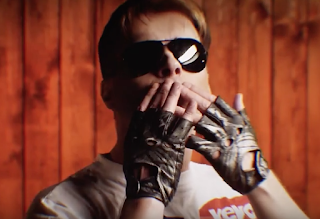 And so it begins.

What with Eurovision happening in Ukraine next Spring, to try and whip up a bit of excitement among the masses the host nation have decided to open up the contest to all comers and let pretty much anyone have a pop at entering a song. Yep, we've got a new Switzerland.

Rather unhelpfully, the competition's own website that hosts all the videos appears to be blocked to anyone outside of the nation - well, they wouldn't want any malicious interlopers helping them to choose a ropy old song now, would they. But there are still a few of the acts happy to share out their wares via the medium of YouTube. Acts like Alex Angel, here.

Looking every bit like the lead singer of Franz Ferdinand after he'd fallen down a well - for some years – his sneery, rock 'n' roll metal voice is clearly (or rather, nearly) modelled on that Axl Rose chappy, and the chugging guitars bring back to mind a whole host of terrible terrible bands who all wanted to be Gn'R back in the day (but who were all actually more like Poison). And this is just one of a whole slew of similarly-tinted entries that he's chucking his hat into the ring with this year - every one of their videos packed with half-hearted female ladies gyrating to the slack metal groove.

But as a season opener it holds much promise for a bumper year of Apocalypse gems. Eyes down for a full house, the game has just begun!
Posted by Roy D Hacksaw at 06:07 9 comments: