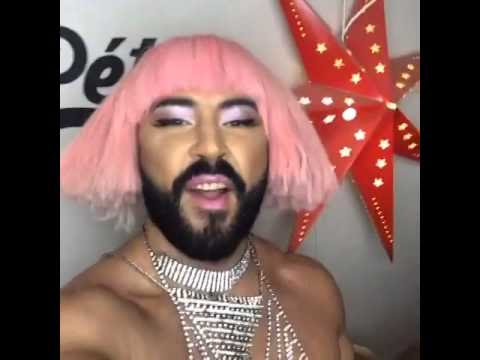 (Click and gamble whether the humourless Swiss have taken it down yet, just like they did that silent one)

When deciding whether to enter a song for this or that country's Eurovision qualifiers there are always a few questions that you should ask yourself. "Is it appropriate for the nation I am considering representing?" should usually be the first one, followed by "Is it any good?" And "Will anybody outside my circle of friemds actually get it?"

So with this in mind I'm still trying to ascertain the thought process behind this somewhat misplaced curiosity. "I know," the artist thought "as a moderately well-known underground drag comedian from Russia, I'll submit a song that not only includes a cheeky Madonna sample, but all kinds of unauthorised samples from a rather stern looking lady who's probably quite important somewhere. On top of that I'll almost certainly be slagging her off in some kind of cruel way, and then credit myself as a moderately well known female pop singer, and to make it even better, I'll leave on the opening screen that betrays the fact that I fruitlessly tried to enter it in for the Armenian selection last year.  The swiss are going to bloody love it!"

How long until the Swiss take it down from their site, do you reckon?
Posted by Roy D Hacksaw at 09:53 3 comments:

ESC fans rejoice! The traditional explosion of all that is truly unhinged and mediocre has kicked off today - oh yes, the Swiss open submissions process is open and ready for business, and it's delivering its usual delights.

The familiar barrage of home produced warblers and international hopefuls have already deluged Swiss telly with their shoddily made produce, but we'll come to that lot in good time. What today is really for is the annual day in the sun for traditional season openers Männerchor Steili Kressä, and they haven't let us down.

As ever, they've provided a ditty about next year's host nation, and of course what could be more Swedish than meatballs. Delight as our favourite drinking men's choir present their tasty savoury delight to a succession of well known Swedish pop acts, then marvel as the meatball itself gets a starring role. It's complete and utter glorious cobblers, of course, but we wouldn't want it any other way.

Ladies and gentlemen, after a long, arid summer – musically speaking, of course – it's my pleasure to announce the official opening of the 2016 Eurovision Song Contest On Season. And what better way to kick off proceedings than with Moldova's perennial prince of darkness, the great Sasha Bognibov.

Many regular commentators of the early stages of Eurovisionism feared that he may never have been able to top last year's masterpiece, Wounded Swan. And indeed, while Alone doesn't rise to quite that level of gloomy majesty, it feels like he's attempting to move things off down a slightly different track this time around.

Beginning with a slightly chilling children's xylophone, Sasha's familiar haunted vocals soon poke through the dark atmosphere, as he wonders, in song, whether he'll ever find his true soul mate. And then, quite suddenly, the tempo pumps up to true Europop levels, and we're led in to classic ESC territory.

It's no world beater, this must be said, but his songwriting is maturing year-on-year, and one of these days he's going to find himself on stage in that tiny Chisinau studio, competing for the crown that he do dearly craves. Could this, finally, be his year?

Video from YouTube. Underlying © lays with the owners of the clips
Posted by Roy D Hacksaw at 10:10 2 comments: