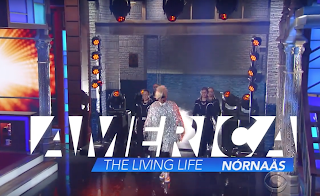 We all knew it wouldn't last long before them Americans wanted in. What with Australia having had a couple of goes, and our favourite show getting screened live over the first pond, the fascination has just exploded over in the colonies and they're clearly dead jealous that we won't let them have a go. So they've declared their entry for next year already! (Shhhhh, nobody tell them about the September rule!)

OK, so this was actually a bit of a spoof from the Stephen Colbert Show, but it was incredibly well observed, and would have made it to at least three of this year's national finals on its own merit. Wait a minute - did we just say "Stephen Colbert"? Yes we did! Somehow Eurovision got itself featured on a high-rating popularist American TV talk show. And when has that ever happened before?

This thing's getting a bit bigger than we ever imagined, right under our noses. Maybe the Americans will be wanting a go before long after all. Oh heck. Altogether now: "We're living the living life…"!
Posted by Roy D Hacksaw at 05:25 3 comments: