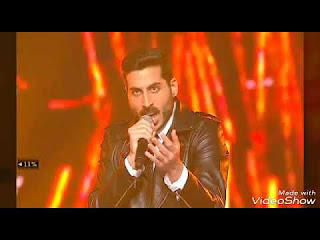 (Click here to see and hear a strange anomaly...)

So it could have been a whole lot worse, but after a long-winded and often confusing affair, Israel finally chose their representative for the home turf entry this year. In a contest that went back to November, but feels like it's gone on so long that I'm convinced my nan sung in it in her twenties, the good folks of the Levant chose a singer who on first inspection doesn't seem terribly promising.

He sounds like a haunted chimney, looks like that bloke from the first week of the internet who played table tennis and said "I kiss you!", and carries all the charisma of a Poundstretcher cheese slice - but somehow you can't stop looking at him.

Is it because his leather jacket is more animated than him? Is it because he looks at you under his eyes like a dog who's shit in the cupboard but knows you haven't found it yet? Or maybe it's because you now know what Sacha Baron Cohen would have looked like in the lead role in Bohemian Rhapsody? But whatever it is, I really can't wait to see what song they finally provide him to sing in Eurovision proper. It could be compelling for so many different reasons.

In the meantime, here's a man with the demeanour of a lonely tree singing Fuego.


PS On reflection, I've probably been a bit mean to the fella. By all accounts he's a lovely chap who's been through a lot in his life. And he won this contest with ease, so he's clearly got something about him, and doesn't need me calling him clever names. But it's not half as bad as he's going to get when Eurovisionia gets their teeth into him. Pray, for his sake, that the song's a blinder!
Posted by Roy D Hacksaw at 16:09