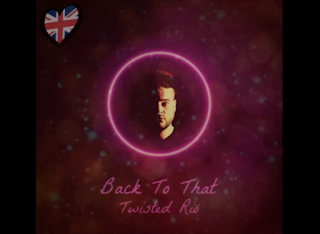 (Click here for a first look at our first applicant...)

So today the BBC announced that they were ploughing the same furrow as last year, and that they would be opening up the Song For Europe submission process for all and sundry. Well, to be reviewed and cast asunder to the OGAE hordes for a single place at the top table at least. All other songs will be coming in the back way as usual. But it's a start, and you can usually find a couple of early adopters instantly creeping out of the woodwork.

Usually, of course, they're the kind of bedroom composers beloved by their nans, their nephews, and precious few other folks who seriously believe that it is they, and only they, who can save Eurovision for the UK - and damn those funny foreigners! So when the first name came up within minutes of the opening of the first press release, by a nice chap called Twisted Riö, we must confess we had our fears.

But those fears were instantly allayed, because our lad here has delivered a smashing little melancholic song about lost youth and long summers. And while it may get lost in the crowd of smash bash disco showstoppers, formulaic Disney ballads and songs about leaving the EU, it really is worth at least one of your ears. Because it's something you don't often get in the UK process - a sweet song sung simply and well.

Good luck, erm, Twisted. It's going to be a long old journey, but we hope you at least catch the ear of the people upstairs!
Posted by Roy D Hacksaw at 11:52