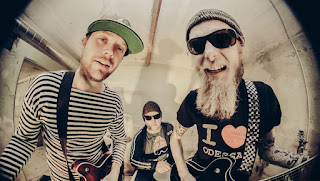 (Click here for this year's first sniff of the moon language...)

It's always one of my favourite days in the Eurovision season when the first list of Estonian performers hits the web. And today's that day. As far as I can establish, this is just a rumour list up to now, but its mix of old stagers (Ines, Ott Lettland, Getter Jani) and completely new names makes it a pretty believable selection.

Up to now there is just the one suggested entry that has any kind of physical song connected to it - but what a doosie that song is! Six Feet Club here offer up a chuggy, insistent groove telling us all about the night time in their home town of Tartu. It's kind of like a more laid back Rammstein, blended in with a post-rave Hawkwind, and we like it very much! The very nature of the song means that it's highly unlikely to so much as break out of it's semi, but it's already a fixture on the Apocalypse iPod, and we've been playing it non-stop all afternoon.

And if this is a precursor to the other Estonian goodies on display this year, well we just can't wait!

Upon chatting to Runo, the singer of this fine mob of noisemakers, we discover that they haven't quite decided whether they're going to enter yet. But I've tried to convince them! So that list is either a secret wishlist from someone who works at ETV, a work of slightly accurate fiction, or a mystical document of future portent. If it's the latter, I'm getting its author to pick me out the winner of the 4.30 at Kempton Park next week.
Posted by Roy D Hacksaw at 08:11